Fair warning, this is the longest post I’ve ever written, mostly because I had help from two lovely friends who are also sharing their thoughts on cleansing. Sit back, relax, and enjoy!

I’ve always been skeptical but curious about cleansing so when the folks at Kaeng Raeng offered me a free 3-day detox kit, I figured I had to try it. I wasn’t sure I wanted to do the full 3 days, but I thought a 1 day cleanse could be a fun little experiment.

And so I began.

When I opened up the box, I was a little confused because there were 9 packets, 3 of each kind, but it didn’t say which was breakfast, so I just grabbed one. I blended it up with just water and ice and it tasted… kind of bland. Then I noticed if you were a “first-timer” they recommend yogurt and fruit be added to the smoothie. I didn’t have any yogurt but I added half a banana and a cup of blueberries, as well as a little almond milk and stevia. After that, it was pretty good.

Next up was lunch. 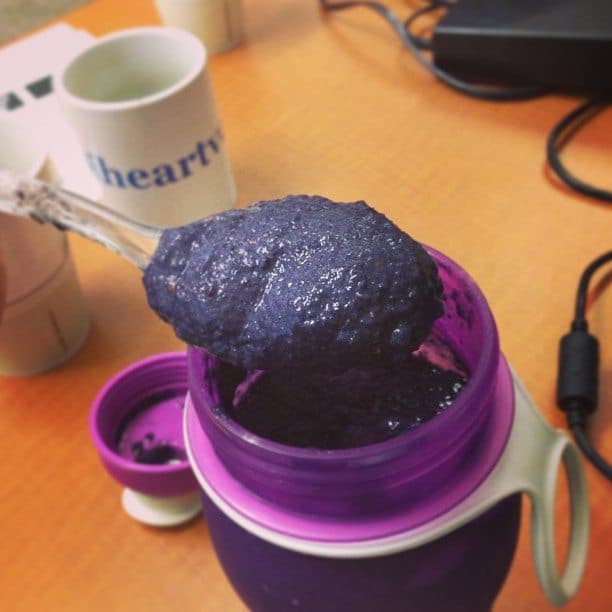 This was the blueberry banana smoothie, which, coincidentally tasted like my breakfast thanks to the fruit I added. I blended this one up before I went to work, adding in a whole banana and blueberries, plus almond milk and stevia again. That made it pretty decent, but it tasted just like breakfast. Oddly enough, I could only finish about half of the shake before I felt so full. I’m not sure if I just didn’t have an appetite for the rest of it, or if this stuff is super filling. Either way, I put the other half in the fridge and munched on an apple.

By the time dinner rolled around, I didn’t feel like myself. I wasn’t particularly hungry, (the shakes really did fill me up) but I felt hazy, tired, and unsatisfied. I realized I needed food. So Alex and I went to Chipotle and I felt completely satisfied, even after eating just half the bowl. Epic fail? I don’t think so. I’m not trying to lose weight, I didn’t feel the need to “reset” my system, and my only goal was to just try it out and see how I felt.

Even though cleansing didn’t seem like the answer for me, it didn’t feel right not to share other prespectives on this. So after a quick twitter poll, I connected with Morgan and Lianna who had both recently cleansed, and had different experiences with it. Their stories are below.

I think I first met Lianna at a Tumblr meet up, and then again at an RVA Comedy Show, and once more when she came to speak at my workplace. She’s so awesome, and spends her days keeping the Tumblr support office in line! When I tweeted about cleansing, she tweeted back that she had a slightly different perspective on it, which she shares below:

I decided to do a cleanse for the typical reasons: feeling bloated, wanting a jump start on healthy eating, and more energy. I was eating a lot of snacks on the go and lunch-meeting pizza at work, so I needed a change, but not a time- or money-expensive one. I decided to go with a variation of Rose Cole’s 21 Day Sugar Detox. No gluten, sugar, dairy, alcohol, chemicals, or high-sodium foods. Also, I don’t like poultry, so I stuck to seafood.

The first two days were great– I was really mindful, I wasn’t craving anything, and I’d planned my meals wisely. By the third day I was very jealous of people visiting the candy bowl on my desk. I’m not really a lover of sweets at all, but I was thinking about the fact that I “couldn’t” eat it and had to switch my thinking to, in the words of my nutritionist, “I can eat anything whenever I want, but I’m choosing to not eat it.” I even recruited a coworker who said a cleanse “sounded fun.” I said, “it is!” but I only sort of meant it. Other friends were already planning a cleanse, so they were great for support too. I recommend doing a cleanse with at least one friend to whom you can gchat, “OH NO I desperately NEED cake today, damn all of these people who are eating cake!” Because they will understand, while all of the people eating cake will say, “oh, just have some.”

By the second week, I was eating huge amounts of almonds and salmon, and drinking more water than ever. A typical day included black coffee on occasion (I tried to kick this habit completely during the first week and was too spacey), eggs for breakfast, brown rice or quinoa and beans with salsa and whatever veggies I had on hand for lunch, almonds (cocoa, cinnamon, and plain) for snacking, and fish and kale or salad for dinner. I did room-temp and hot yoga and various cardio things at the gym. Really rough days meant an almond latte from Lamplighter was in order.

By the third week, I was really craving a strong drink (or ten), a giant pile of spaghetti, and a swimming pool full of chocolate, so I added in some fruit to the cleanse, which definitely helped with the cravings and my extremely low energy levels. Overall, I felt really great about holding out for the full 21 days despite minor slip ups. My biggest achievement was picking up dozens of Country Style donuts for my coworkers without even opening a box. Oh, thank you for your applause, you’re too kind. My lowest point was when I wouldn’t let go of an apple pie candle because I wanted to keep smelling it— inhaling deeply with closed eyes– despite my friends attempting to have a conversation. You win some, you look crazy sometimes. The whole experience was eye-opening. I thought I was a fairly healthy eater and someone who didn’t care about drinking all that much, but three weekends of ordering water when all of your friends are enjoying cocktails or staying in to cook another dinner of fish with a tiny bit of olive oil while new restaurants were opening made me more aware of just how intertwined my social life and food are!

Would I do it again? Definitely. Maybe. Probably. The rewards are worth it! My energy levels were way up, I dropped 19 lbs. total (which was completely healthy for my body and fully backed by my nutritionist), I felt great physically, and I was proud of myself. In fact, writing about it is motivating me to start another cleanse soon!

Morgan, aka RVAYogi is a local health and fitness enthusiast, who recently completed a juice cleanse (this girl has willpower!) and I’m excited to share her positive experience below:

I recently did a three day cleanse using juices from Cooler Cleanse. Each day consisted of six juices which you’re supposed to drink in order, from 1 to 6. You’re advised to drink your first juice in the morning and then drink one juice every two hours for the rest of the day. They recommend an early bedtime which is a good idea if you want to avoid hanger pangs and late night snack cravings.

Here are the six juices and my thoughts on each one:

1) Sweet greens: Your basic no frills green juice with a hint of sweetness
2) Grapefruit & mint | Pineapple Ginger | Watermelon Lime: All were equally tasty.
3) Essential green: Sadly, this juice lacked the sweetness of juice #1. My tastebuds definitely detected some bitterness.
4) Young coconut water | Spicy Lemonade: The lemonade was decent. However, I’ve never liked the taste of coconut water. Lucky for me that they only included one bottle of coconut water. Despite not enjoying the taste, I drank it anyway to keep my hunger pangs at bay.
5) Essential red: Very tasty juice made from carrots, beets, apple, and lemon.
6) Almond Milk: Ahhh…This was a really satisfying and decadent tasting sweet nut milk made even sweeter with vanilla bean and dates. Of all 6 drinks, this was the tastiest, most caloric, and most fat laden. What a treat to end each day with!

I managed to get through all three days of this juice cleanse without eating solid foods or snapping anyone’s head off. I suffered through hunger pangs throughout the entire three days. Fortunately, the growling tummy sensations grew less intense the further I got into the cleanse. I doubt if anyone actually likes the sensation of intense hunger, but feeling this degree of hunger made me  realize how lucky I am to have food available to me whenever I want it.

When I stepped on the scale after the cleanse was over, I was surprised to see there was no change in my weight. This was disappointing, but some of my clothes were looser. Having my clothes fit a bit more comfortably was one of my main goals for this cleanse, so from that perspective, I consider it a success.

I might consider doing Cooler Cleanse in the future. If so, I’ll to ask them to substitute the spicy lemonade for the coconut water. I found out by emailing customer service that they’ll give you two substitute juices per cleanse. Their customer service team deserves a shout-out for really being on the ball. I emailed them a question at 7:30 am, and within three minutes I received a friendly reply.

Lianna & Morgan, thank you for sharing your cleanse thoughts!

So with all that in mind, if you’re interested in trying this out, leave me a comment and let me know. The folks at Kaeng Raeng have offered to send one person a cleanse kit of their own. Please indicate in your comment that you’d like to try it. I’ll only draw a winner from the people that actually want to try it out. Then you can let me know what you think! I’ll choose a winner on Tuesday May 21st.

What are your thoughts on cleansing?