You are here Dinner » Vegan Chorizo and Chickpea Stew

This vegan chorizo and chickpea stew has tons of flavor, thanks to the soy chorizo! Plus, it’s loaded with protein thanks to the “chorizo” and chickpeas. It’s a fast meatless meal that only takes a few minutes to prepare!

This recipe is a little different than what I normally share here on the blog. I rarely use any “fake” meat because I don’t tend to crave meat or meat flavors. Not to mention, most meat substitutes aren’t exactly healthy. But I’m making a little bit of an exception because this recipe is so easy and if you’re someone that does crave meat, I think you’ll like this!

What is Soy Chorizo?

Soy chorizo is a vegan meat-substitute made from textured vegetable soy protein. I used the soy chorizo from Trader Joe’s and I like it because the flavor is awesome and the ingredients list is fairly clean. It’s similar to tofu, but since it’s a chorizo texture, I think it’s a little easier to work with. It comes in a plastic “casing” so you can either cut it all off, or just cut off the portion you need for a recipe.

Where to Buy Soy Chorizo

As I mentioned, I bought mine at Trader Joe’s, in the refrigerator section near the tofu and tempeh. If you don’t have a Trader Joe’s near you, Upton’s Natural makes seitan chorizo, which is wheat-based. I haven’t tried it but I’ve heard good things about that brand!

What Can You Make with Soy Chorizo?

Obviously you can make this vegan chorizo and chickpea stew but there are plenty of other ways you can use it! Try it in tacos, add it to scrambled eggs, or toss it on top of a taco salad. It’s a great source of protein, although it is a bit high in fat. But it can add a lot of flavor to any meal and it’s easy to prepare!

This recipe is super simple since the chorizo is already bringing a lot of flavor to the dish. It’s great when you’re short on time but you want something “meaty” and filling!

The soy chorizo in this stew adds an amazing depth of flavor of this dish! Plus, it’s loaded with protein thanks to the “chorizo” and chickpeas!

How to Serve Vegan Chorizo Stew

This stew is delicious right out of the bowl but you could also serve it over rice. We’ve had it both ways and it’s delicious! This dish reheats well so it’s great for leftovers or packed lunches. It will thicken a bit once it cools so you can either add a splash of water when reheating or just enjoy a thicker stew!

Do you want to see more recipes like this? I’m curious if you like “faux” meat recipes! 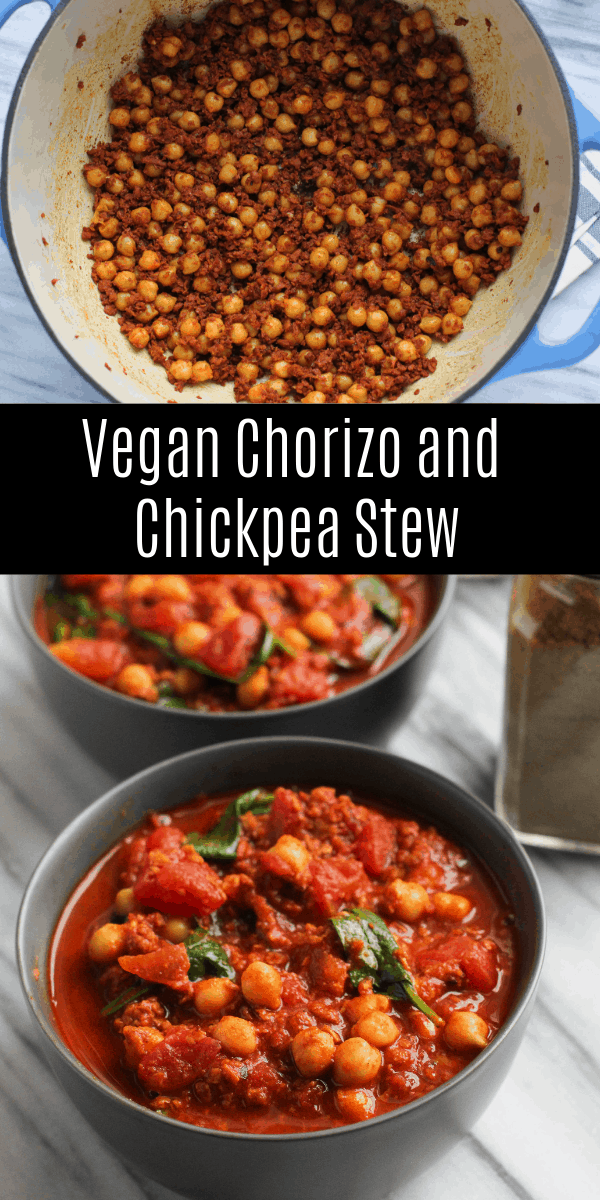