Favorite Foods and Trends at the Natural Products Expo East

by Liz September 21, 2017 This post may contain affiliate links.

This past weekend, I went to Baltimore to catch the Natural Products Expo. I went a couple of years ago, so I had a better idea of what to expect this time. It’s an awesome way to see what new products will be hitting the shelves and what we’ll see in the coming year! Here are some of the trends and products that I noticed!

There seemed to be an increase in plant-based products like nut milks, nut-based yogurts, dairy-free cheeses and dairy-free ice creams. This shouldn’t be too surprising. If you looked at the “milk” section recently, you’ve probably noticed that it’s not just almond milk anymore. There are dozens of brands featuring cashew milk, macadamia nut milk, and nut-based creamers. A recent study from the Plant Based Foods Association and The Good Food Institute found that plant-based food sales were up 8.1% compared to last year. Clearly, things are still headed in that direction. Here’s are a few of the new products I sampled:

Milkadamia, which is made from macadamia nuts. They carry original, unsweetened, unsweetened vanilla, and latte de barista. To me, the original macadamia nut milk didn’t taste all that different from the almond milk I normally buy, but I rarely sip them plain anyway. The Latte de barista was a much creamier option, designed to be used for dairy free lattes.

Califia Farms had a station with their entire line of products. I knew they made milk alternatives but I didn’t realize they also had cold brew coffee. They have a bunch of different milk options (including coconut, almond, and cashew) and they also had a lot more flavors than most brands. I usually just buy unsweetened almond milk but the classic cinnamon horchata seems like it could be a unique holiday option!

Kite Hill doesn’t make nut milk but they have some interesting nut based yogurts and cheeses. I’ve tried their regular yogurt before and it was fine, but it wasn’t as thick and creamy as I hoped. At the expo, I sampled their Greek-style yogurt and I felt like that was much closer to the yogurt I’m used to. It still wasn’t as thick as a traditional Greek yogurt, but it was getting closer. I tried the vegan ricotta and to me, it just tasted like almonds. It might be better in a recipe but straight up on a cracker, I wasn’t a fan. The chive cream cheese was much better in my opinion. Still not as creamy as most cream cheese but the flavor was pretty good. Their new probiotic drink was decent and it reminded me of kefir. No complaints on the texture or flavor, but it wasn’t something I see myself buying regularly.

New On The Go Snacks

The granola/protein bar trend doesn’t seem to be slowing down anytime soon. Again, this wasn’t a huge surprise. I did notice that it seemed like most options were heavily marketing themselves as vegan or paleo but there didn’t see to be much variety if you wanted something low in sugar or carbs. The focus tended to be on added protein. 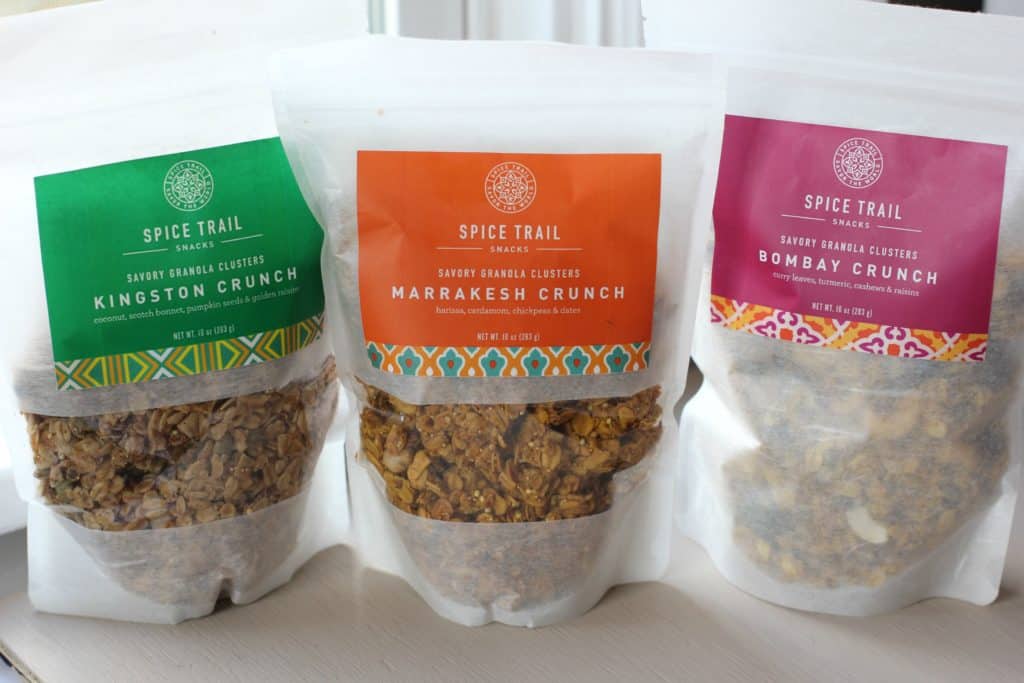 Spice Trail Snacks– They make savory granola which sounds a little crazy but it was oddly satisfying. It comes in three different flavors based on Indian, Moroccan, and Jamaican spice blends. I was skeptical at first but I found myself going back for more. I was mostly excited to have a granola option that isn’t loaded with sugar, but I should note that these still contain 6g-7g of sugar per serving.

Fuller Foods– I’m not going to pretend like these cheese puffs are a super food but woah they tasted good. If you’ve avoided the beloved cheese puffs of your youth and you’re missing those crunchy puffs followed by the powdery cheese that sticks to your fingers… this might be your best alternative. It’s a surprisingly clean ingredients list, including not GMO corn and real cheese. I’m not typically a blue cheese fan but the blue cheese jalapeno was crazy good. (Note: These are hard to find in store… in Richmond you can apparently only get them at Bed Bath and Beyond. Who would have thought?)

Natural Sins– They call themselves the “un-potato chip” which actually made sense! I expected these fruit chips to taste like, well, dried fruit. But they’re so crispy and crunchy. The mango chips were my personal favorite but the pineapple ones were good too. I could see myself snacking out these right out of the bag but I also think they’d be a good yogurt or smoothie bowl topping! 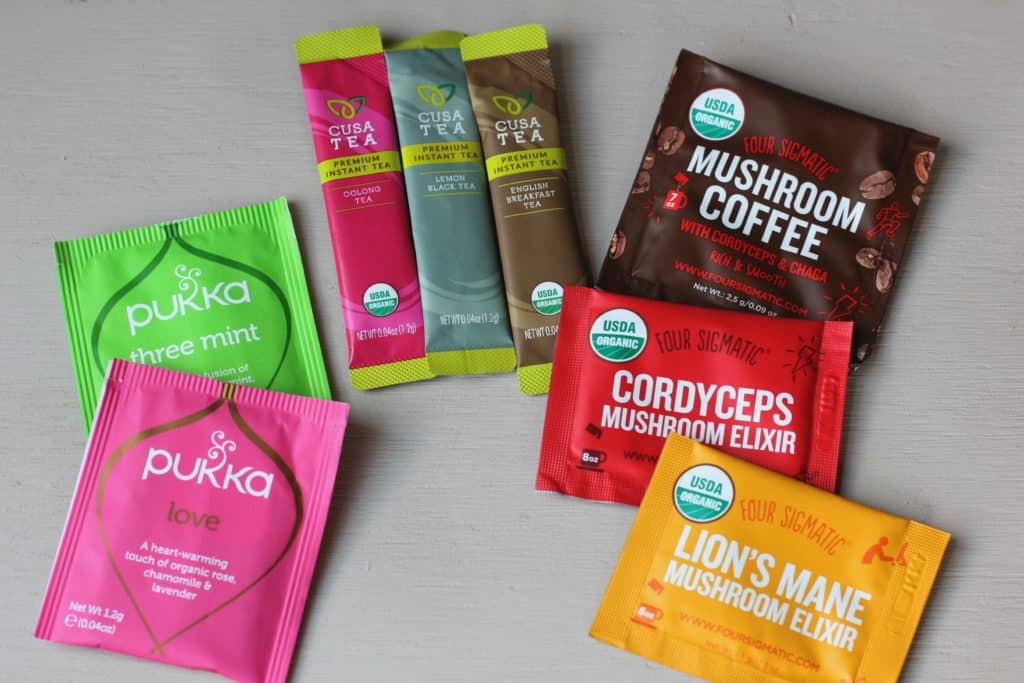 There seemed to be a surge in drinks with benefits. I’m not talking soda alternatives (although there are plenty of those) but it was more about drinks that serve a purpose or offer some healthy perks. There were plenty of new kombucha brands on the market but we spent more time sipping on the new tea and coffee options. These were my top picks:

Javazen– This was like a mash-up of instant coffee and tea. They were tea bags filled with coffee grounds so you could make a single serving cup of coffee with just hot water. It sounds almost too simple but honestly, I’d never seen that before. Sure, you could get instant packets of coffee, but typically the quality of coffee is pretty bad. This was a delicious cup of coffee. They also had a green tea and coffee blend which I didn’t expect to like but it was surprisingly delicious.

Four Sigmatic– I was hesitant to try this mushroom coffee. I don’t really like mushrooms and I kind of assumed this would taste like dirt… but it didn’t! It was surprisingly smooth and almost chocoately. Supposedly these mushrooms have immunity and energy benefits. While the science behind it might be a little hazy, I certainly don’t think you can go wrong with these superfoods! If you’re looking to switch up your coffee routine, try it!

Cura Tea– This was an instant tea that comes in a packet just like a drink mix. Again, this one sounded really simple but it was a nice alternative for when you want some iced tea but you don’t want to brew a cup and wait for it to cool. You literally just mix the packet into a cup of hot or cold water and that’s it. I used to be obsessed with flavored drinks when I was in college and now I’m skeptical of those little artificially sweetened packets… so this seemed like a good alternative. It’s not sweetened, but it’s a nice flavor. 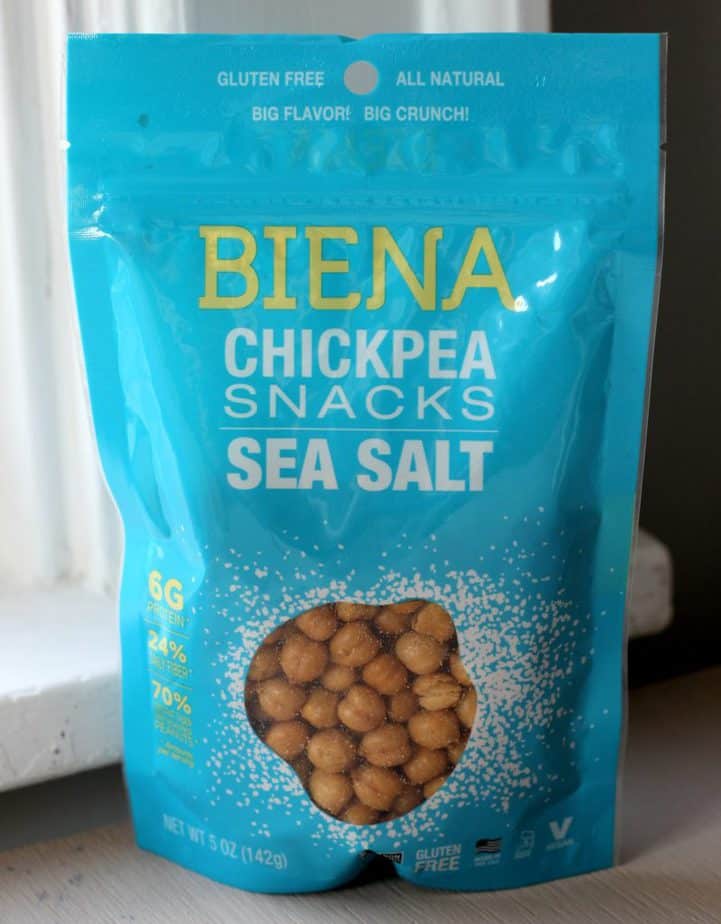 Biena– These chickpea snacks were so simple but so delicious. I brought home the sea salt flavor which is great when you need a crunchy, salty snack. Biena recently launched a chocolate covered chickpeas which I know sounds crazy, but I’m telling you… they were really good. Sweet, crunchy, and satisfying. I also really liked the habanero flavor, which was spicy with a tiny hint of lemon. These snacks were satisfying and low in sugar but high in protein and fiber. That’s a win all around!

Tiny Hero– This quinoa can be prepared just like pasta. No rinsing, no measuring. You just boil water, add the quinoa, cook, then drain. Truthfully, I don’t have any problems making quinoa since I just use my rice cooker, but this quinoa has more of a sticky rice texture. So if you’re using quinoa in something like a stir-fry, this is exactly what you need!

Path of Life– They’ve got a bunch of different frozen foods and we sampled some of their vegetable side dishes. My midwestern heart will always flip for some hash browns and these were a delicious and slightly-healthier option. They’re a blend of potatoes and quinoa and they cooked up perfectly crispy! The kale and butternut squash blend would be a perfect fall side dish.

The Toasted Oat– This might be the best granola I’ve ever eaten. I know that’s a bold statement, but it was incredible. It’s not low calorie, it’s not particularly high in protein or fiber, and it’s not low in sugar… but it’s worth it. It felt like eating an oatmeal cookie straight out of the oven when it hasn’t quite cooled yet and it just crumbles in your mouth. This was like dessert granola. I wouldn’t eat it for breakfast but I’d absolutely eat it for dessert.

One of the first questions we asked at most booths was “Where can I find this in Richmond” and while the answer was commonly Whole Foods or Wegmans, we also noticed a lot more people were selling their products on Amazon. Obviously, it’s hard to get shelf space in a store, so it was nice to know that most of these things could be found on Amazon if you don’t have those grocery store options nearby!

Have you tried any new products recently?