by Liz December 13, 2010 This post may contain affiliate links.

I’ve got a pretty serious relationship going on with peanut butter these days. In my opinion, it pretty much makes anything better. (Particularly when it gets involved with bananas or chocolate.) The one problem? Um, I could pretty much eat the whole jar, and well, there ARE ~200 calories packed into each 2 tbsp serving. Which means that my beloved peanut butter is one of those “great in moderation” foods. Well what if I want peanut butter ALL the time? Hm? Behold… PB2.

Have you tried PB2? 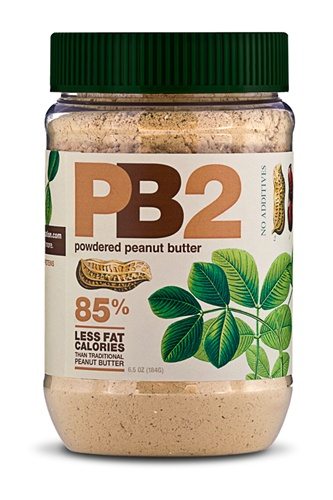 PB2 is Bell Plantation‘s amazing creation, which is a powdered peanut butter that essential has the fat literally pressed out of the peanuts. It comes in a powder that you simply mix with water. It has the consistency, and it pretty much tastes like peanut butter. (It’s also worth clarifying that this really is just peanuts, it’s not a weird chemical concoction of various peanut “flavors”. This is all natural, baby.) It’s definitely not as oily as peanut butter (um, duh) so adjust your expectation accordingly. You can’t get a crunchy variety, for obvious reasons, but this still makes a great creamy pb swap.

Oh, and it’s only ~50 calories, per 2tbsp serving. That’s 1/4 the calories of traditional peanut butter! Yes, I’m kind of in love. I can now top pretty much anything I want with peanut butter 😉 They also have little single serving packets, so I can take it to work! I’m pretty excited. Of course, my homemade vitamix peanut butter will STILL hold a special place in my heart, and on my plate. So it’s not going away anytime soon 😉

Speaking of which, I made another kind of nut butter! This time, I made chocolate almond butter.  But I cheated 🙂 Short cut! I used the Emerald Nut Cocoa Roasted Almonds!

I just threw 2 cups into the Vitamix, and blended as usual!

It turned out pretty well! It looks pretty much like regular almond butter, and it tastes similar, it just has a hint of cocoa. Not bad, but in the future, I’ll probably just stick to plain almond butter!

On a totally unrelated note (and I mean totally) are you a multi-tasker? I’m currently watching  a PBS documentary about the “digital” age and about how my generation is connected all the time. Apparently multitaskers think they’re much more capable at doing it than they really are. Supposedly (according to this NASA study) we would be more effective if we just focused on one thing at a time. Yet, here I am, writing and watching a movie at the same time! I’m also realizing that I can’t go more than a few minutes without texting, checking facebook, tweeting, checking my e-mail. How short has my attention span become? Doing one thing doesn’t seem to be enough anymore…

Are you a multi-tasker? Do you think you’re more efficient doing one thing at a time or tackling multiple things at once?

Hope you’re all having a fantastic Monday!

22 comments on “The Alternate Peanut Butter”