by Liz February 3, 2012 This post may contain affiliate links.

After a lovely service at Redemption Hill, a few of us settled on Kitchen 64 for lunch. (<– that right there is a good sign. Normally there is at least one person who complains that *insert name restaurant* isn’t good.) I’d actually been there before but hadn’t eaten anything, so this time I was excited to really experience the place.

It’s located right off for 64 and 95 which makes it convenient no matter where you live [in Richmond]. We went around 1pm on Sunday, and they were offering breakfast and brunch items, but the brunch items were extensive enough that I’d call it lunch. 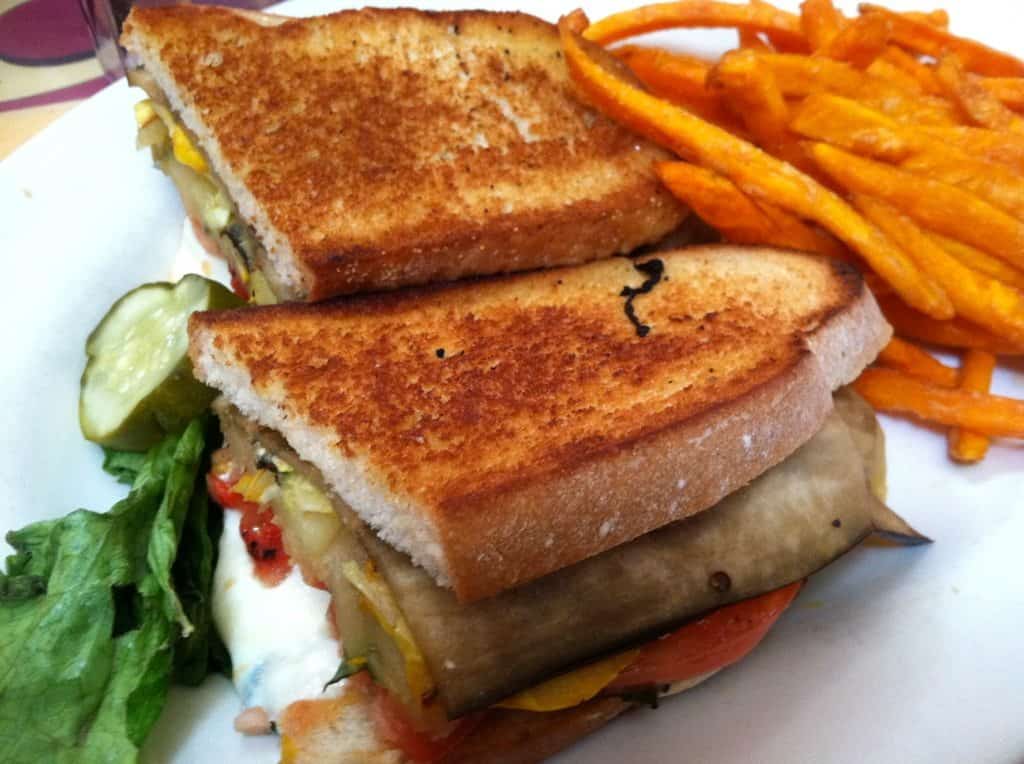 I ordered the Grilled Eggplant and Zucchini Sandwich, which also had mozzarella, tomatoes and roasted red peppers (and apparently a vinaigrette, but I didn’t really taste that). It was served on toasted wheat bread and aside from being difficult to eat, was quite delicious. The vegetables tasted fresh, and the flavor was delicious on its own, (instead of those sandwiches that rely on fatty dressing and sauces to deliver flavor). I had this with sweet potato fries which were amazing, but when are sweet potato fries ever NOT amazing? The sandwich + fries was only 8.50, and was big enough that I took half home for dinner. The service was fairly quick, and the restaurant had a diner atmosphere but didn’t have the “sticky-menu-dirty-restroom” thing that most diners have going on.

I ended up going back again a few weeks later and had the pleasure of trying their Greek salad. It was huge, which is my favorite kind of salad 😉

I think I actually liked the Greek salad even more than the sandwich!

Apparently, they also have some good happy hour specials depending on the day, so I think I might be making a trip back there before too long…

Eggplant, love it or hate it?

« Previous PostWhat I Ate [to celebrate] Wednesday!
Next Post » More Than You’d Ever Need to Know