I like a good challenge. Especially when it’s around getting people to eat more vegetables. So in an attempt to get our friend to eat a few more vegetables, Lindsay and I invited a couple of boys over for dinner, and whipped up a healthy-ish dinner for them.

But I’m getting ahead of myself. It’s Wednesday, and this is what I’ve been eating!

A smoothie with a side of trail mix breakfast cookies 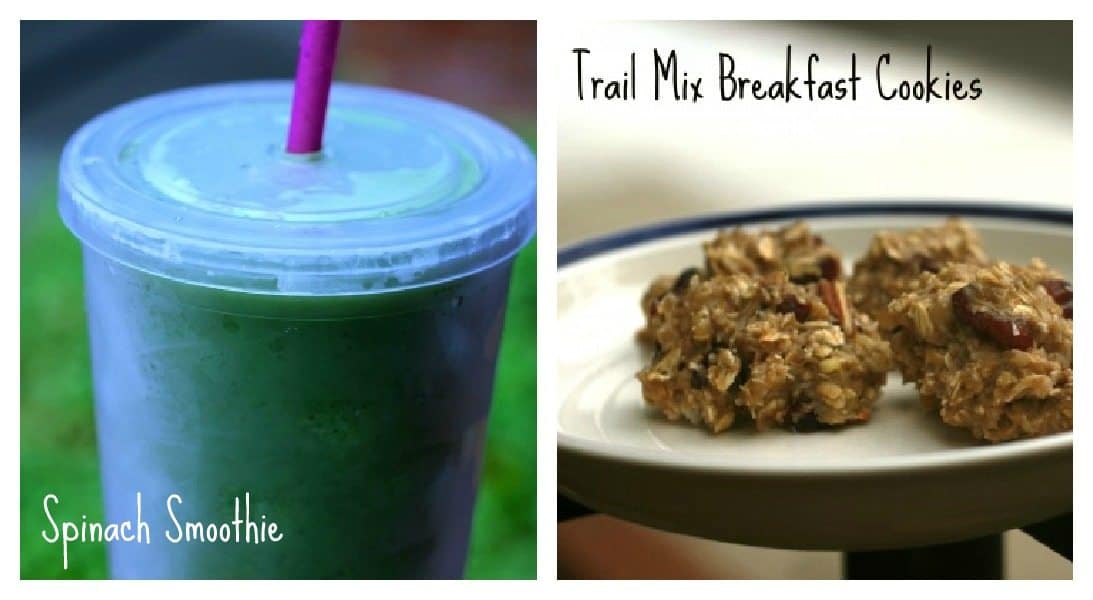 I’ve been using frozen spinach in my smoothies, because it’s way cheaper than fresh. You still can’t taste it, and I’m still getting the benefits of the greens. I call that a win-win.

I brought a whole wheat pita from home, and I planned on stuffing it with hummus and veggies, but I was happily surprised to find tabbouleh salad in the cafeteria! 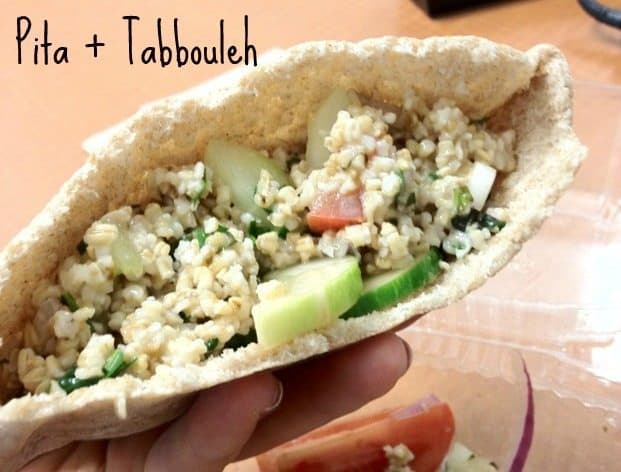 I also added in some cucumbers, tomatoes and onions. It was filling and delicious! I love the flavors in salads like this.

For a grain-free tabbouleh recipe, try this one!

Ah the dinner.Making a vegetarian dinner for a bunch of non-vegetarians isn’t easy. We wanted to make something hearty and filling, so they wouldn’t miss the meat. I also didn’t think it was a good idea to attempt any kind of s0y-meat product, because… people get weird about that. We got our inspiration from this recipe, but ended up changing it up a bit, partly because I don’t have a grill! 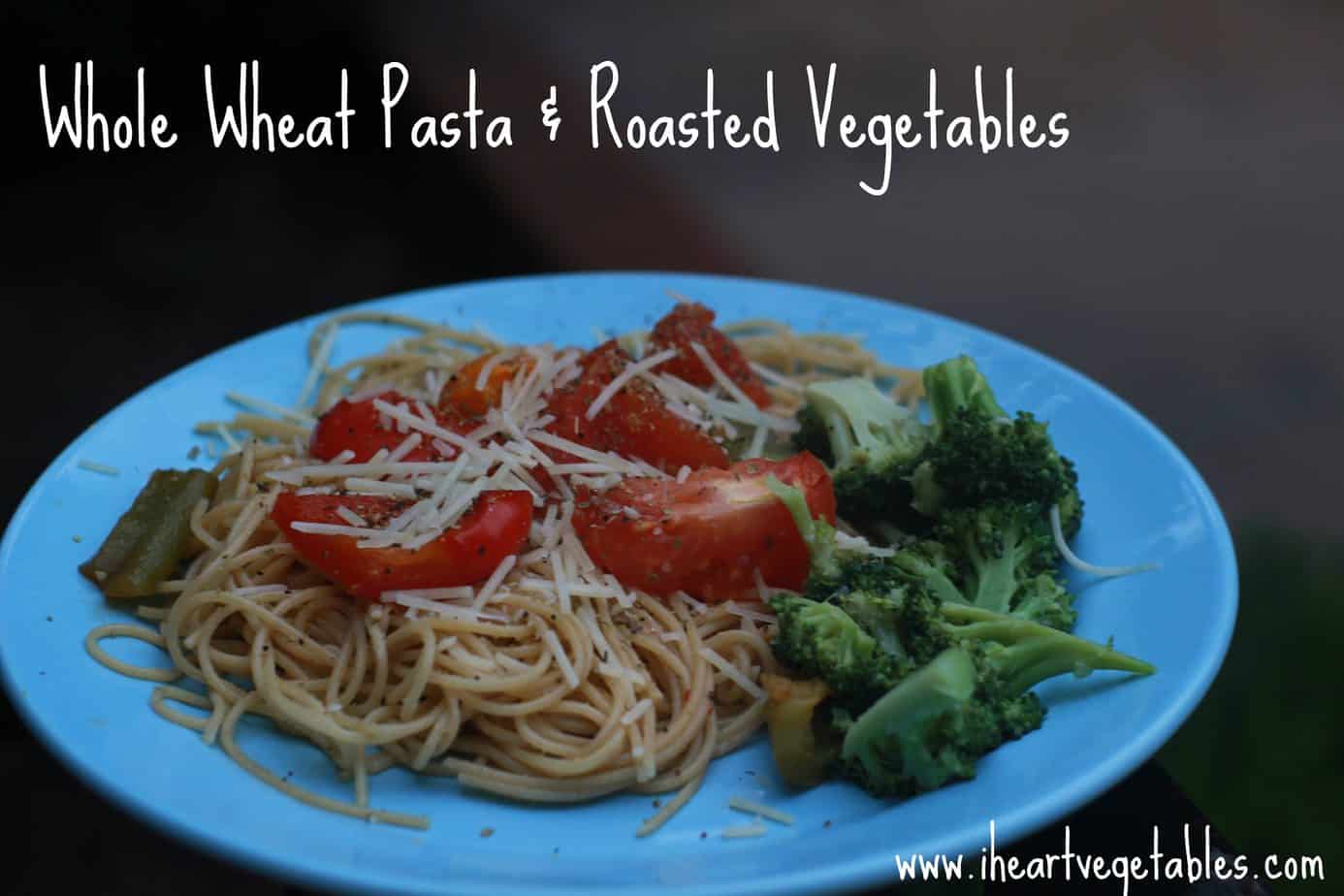 Preheat the oven to 400. Spray a baking sheet with olive oil and rub with a clove of garlic. Slice your tomatoes and bell peppers into large pieces, cover with foil, and bake for about 30 minutes or until beginning to brown on the bottom. Chop the broccoli and put in a sauce pan, with enough water to cover it. Bring to a slight boil and cook until just tender. In another pot, bring water to a boil and cook the pasta according to the directions. The hardest part is getting all three of these things to be done at the same time, but don’t worry, it doesn’t have to be perfect. Drain the pasta, and add in 1 tbsp olive oil. Serve the pasta topped with all the vegetables, a little parmesan cheese, and all your spices. Easy-peasy.

After we were full of pasta and veggies, we decided the night was calling for some fro-yo, so we walked over to sweet frog, and I consumed this delicious monster: 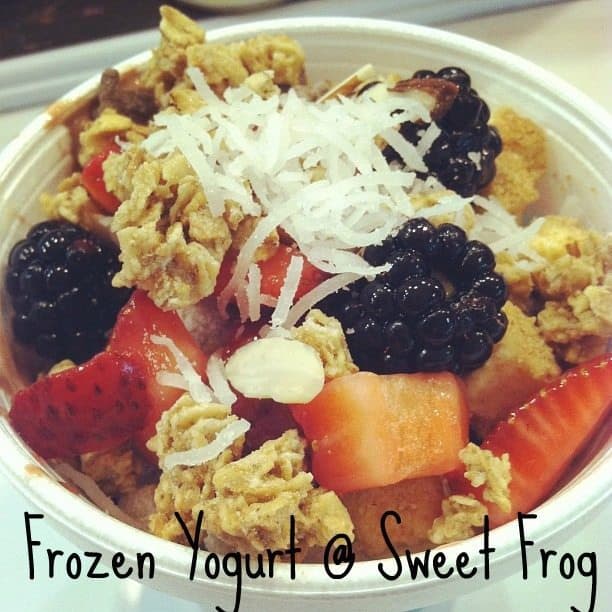 I went with chocolate & cake batter flavors with as many toppings as I could cram into the cup. (For more random/cliche instagrams, you should follow me.)

What are you making for dinner?

54 comments on “Feeding the Boys”